Lahti Precision supplies dosing systems for batch and continuous mixing lines as well as equipment and systems for handling and packaging bulk materials.

Continuous dosing systems are based on dosing belt feeders and Loss-In-Weight feeders. Batch process dosing systems are implemented with hopper scales and dosing devices suitable for the raw materials being processed. System automation typically includes electrification as well as control logic and user interface. In a single feed supply, all of these can be integrated into the weighing controller or the feeder can be connected via a field bus to the subscriber’s automation system.

Typically in the Loss-In-Weight feeder, the material is fed into the process with a set mass flow (kg/h or t/h). Usually it consists of a hopper scale, on the bottom of which a dosing screw, a vibrating feeder or a rotary feeder is speed controlled. The Loss-In-Weight Controller measures the mass flow leaving the feeder and controls the feeder speed to reach the desired mass flow.

The filling of the weighing hopper is performed automatically when the weight of the container drops below the lower limit. The hopper is intended to be filled as quickly as possible because the feed has to be held at constant speed during filling. Depending on the material, even during filling, the mass flow can be adjusted according to various algorithms to minimize the control deviation and, at the same time, the change of mass flow at the end of filling. 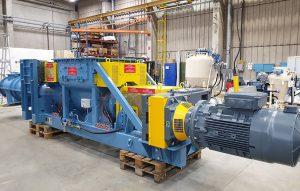 In a Loss-In-Weight feeder, a material is typically fed into the process at a set mass flow rate (kg / h or t / h). Usually it is a tank scale with a metering screw, a vibration feeder or a shutter feeder at the bottom. The Loss-In-Weight controller measures the mass flow from the feeder and controls the metering device acting as the feeder to achieve the desired mass flow. The filling of the weighing tank is carried out automatically when the weight of the tank falls below the lower limit. The aim is to fill the tank as quickly as possible, since the feed has to be frozen at a constant speed while filling. Depending on the material, also during the filling, the mass flow can be adjusted according to various algorithms to minimize the control deviation and at the same time the mass flow oscillation after the filling.